Lijiang street built by the mountain, water flow and design, delicate texture, with red breccia (marble stone paved, the rainy season) not muddy, never dry fly ash, stone patterns of natural and elegant, delicate texture, and the whole city environment. Square Street is one of about 4000 square meters of the trapezoid small square. 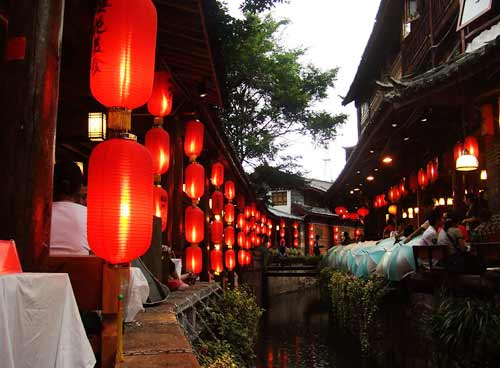 In the Old Town of Lijiang District of Yu River, across the 354 bridges, its density is 93 per square kilometer. Form of bridges (as), stone bridge, stone bridge, bridge etc.. There are more famous lock Chui bridge, Dashiqiao bridge, South Bridge, thousands, saddle bridge, Renshou bridge, were built in the Ming and Qing dynasties.

The wooden house was formerly the Lijiang hereditary wood’s office, “prepare to yuan, Sheng in the Ming dynasty”. After the war turmoil, the spring of 1998 reconstruction, and the establishment of the city museum in the house.

Wufeng building is located in the north of Black dragon Pool Park, built in 1601, was released in 1983 for the Yunnan provincial key cultural relics protection units. The building is 20 meters tall, with three fold, Wu Dan octagonal, as layer three burden structure research, based in Asia “, a total of 24 cornices, like five Phoenix wings to instrument, named five Phoenix tower.

Imperial College in the road, factory Alley Bar category went you can see the crown show. Wang boss is a fan of old furniture , so that the store would have had particularly comfortable to sit on old chairs. Each file is an old carved window frames, decorative wall Blendeder is an old bed , warm coal stove fire, and even the roofs are painted on the flight Dunhuang. It is said that foreign tourists come here to be excited instead of screaming.

Coffee is hidden in the foot and the foot of the tower bell tower in Beijing , logical, because coffee is the name of the Lord. In sunny afternoon, sitting on a wooden chair with colorful pillows , lace on the screens , the subtle scent of wild chrysanthemum fresh , the owner personally enjoy making coffee , you can make your own beans to choose such , the traditional coffee personally , a small town Type a good feeling and the simplicity of rural life, breath, feeling , romantic and lazy.

Twelve Oaks Lane not eat , the coffee is on the menu , which is very affordable in addition to wine , and the price , but also the most expensive mocha $ 22 . The cocktails were the most common product, so nothing special, decorated like everywhere as simple and rustic . Lemon -flavored tea pot, you get beautiful lodge to use options almost transparent white porcelain. Then be able to sit near the window , you can safely in an ear affected afternoon business world play of sound. 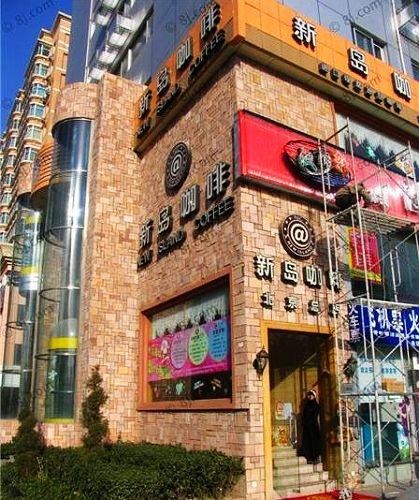 Huaihai Road is located in the southeastern Huangbeinanlu to Madang Road West, north along the Taicang Road, south of Zizhong Road. Xintiandi divided to preserve old buildings in the South and North in two parts, the main building of the modern South, Nordland Shikumen .

Shanghai Xintiandi is a historical and cultural features , the integration of Chinese and Western city tourist attractions, it is a sign of modern architecture in Shanghai Shikumen building city -based, for the first time the Shikumen changed original residential function due to its innovative business operating functions , this piece reflects the history and culture of Shanghai old house in a number of international standards for dining, shopping , entertainment and other features fashion, leisure and cultural and entertainment center turns .

Go Xintiandi , when the clock back , as in the twentieth century , two 1930 Shanghai, but step by step in the interior of each building , the very modern and stylish, the new world to experience the unique concept , which in combination with organic – Patchwork cleverly arranged to form a first Shanghai Symphony , so that visitors from abroad a unique taste of Shanghai culture.

Xintiandi , its modern silhouette and the inner surface of history and culture, as well as international business content , so that the elderly , it is in the new world very nostalgic feeling that young people of fashion would think , feel in the new world of foreigners , it is “China” , Chinese people very Western style , and soon became the cultural taste of Shanghai casual consumer websites .

Media of South Korea have recently reported that the Spring Festival this year, sales of department stores in Korea has grown exponentially thanks to the influx of Chinese tourists. Travel agents, cheap, convenient visa is said, what South Korea free exercise of choice for Chinese tourists.

Data: a person spends the equivalent of buying a car

According to Yonhap news during the Spring Festival, a large influx of Chinese tourists at major retailers in Korea.

Lotte Department Store, said that during the Spring Festival January 31 to February 9, CUP card transactions from the point of view of Chinese sales increased 125% for three consecutive years to achieve triple digit growth.

If the brand of local common modern Korean car, for example, the price of 60,000 to 300,000 yuan, Chinese tourists per capita sales in the local purchase can buy a modern mid-size car.

Reporters spotted yesterday morning at the Ministry of Culture, Sports and Tourism Web Site for the latest Korean Chinese statistics, the per capita consumption of Chinese tourists in Korea amounted to $ 2.317, followed by reporter compared the other major tourist destinations data in 2012, found that Korea was more than luxury goods in France, ranking second.

Analysis: South Korea in the free exercise of the option

Travel agents Spring Festival this year statistical exercise cities, urban basic Korea ranked first, two, why so many tourists to South Korea? Number of travel agencies, he said, mainly because the reasons for the cheap and convenient visa.

Reporter asked travel agents Spring Festival launched the fare of Korea, a Seoul three days of exercise basically remained around 2,000 yuan, while the domestic price of the same product from the same number of days, visitors can choose Jiangzhe tour.

Tour of South Korea pushes prices lower, mainly due to the annual tourist season, and airlines are the main focus of fighting agencies seats, seats quite favorable season, the airline gave fine, so around $ 2000 for sale price, basically to keep the cost of the travel agencies.

Meanwhile, the South Korean visa easily, such as household registration in Beijing Visitor, or 5 years, had traveled visited the OECD (Organization for Economic Cooperation and Development) countries, tourists, only application form, photographs, passport, ID card can be handled directly.

In addition, visitors to Korea, more shopping. Haitao Tourism Marketing Manager Sunli Chan said, because of China close, in addition to products care skin free local taxes and the price is very cheap, as many tourists to South Korea for its shopping. “You want to buy a new season clothes and bags, and a direct hit on a ‘fly’ to South Korea to buy some, who to go to France to be much more convenient.”