China, which is expected to become the second largest wine market in the world by 2020, has a strong appetite for imported wines that have grown outside of France’s comfort zones for lesser-known Georgian and South African wines. 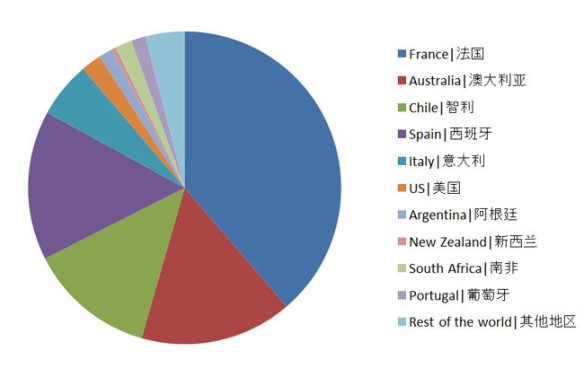 By 2020, the country is expected to consume 94 million cases, or 72% of global wine growth, according to a joint report by Vinexpo and IWSR. The share of domestic wines on the continental market has gradually decreased due to the growing interest in imported wines, whose current market share is around 30%. source http://www.zhongguo-wine.com/

In the first half of the year, the country imported

French wines are still at the top of the pack, but the best-performing New World countries, notably Australia and Chile, with their unique advantage of a free trade agreement with China, are climbing fast and steadily in the ranking.

By 2020, China is expected to surpass the UK to become the world’s second most valuable wine market after the US.

This will make China a main driver for the global wine market shift as consumption growth in the next few years will be mainly coming from China-led Asia pacific countries and the US, Guillaume Deglise, CEO of Vinexpo said, citing findings from a study conducted by Vinexpo with IWSR for the global wine and spirits market overview from 2016 to 2020.

“Clearly there are two countries that are really driving the wine consumption, which are USA and China,” stated Deglise. Wine consumption in the US is expected to reach US$38.6 billion by 2020, up from US$34.5 billion in 2016. While in China, wine consumption will climb by 39.8% to US$21.7 billion compared with US $15.5 billion worth of wines drunk in 2016.

“But growth is on very different profile. So we need to go a little deeper. We expect China to actually consume 94 million cases in 2020, up from 52.7 million cases, which is 79% growth, representing 72% of worldwide wine growth,” he continued, noting that China is not yet a strong wine producing country, which means imported wines will play an increasing role in domestic market.“USA is different, because US is also a very strong producing country, but basically that won’t be enough for the whole market. They need to import more wines to meet the demand, so we expect an additional 3.8 million cases for the next few years,” Deglise added.